SHOUT: A safe place to meet for LGBTQ+ people in Wageningen

SHOUT Wageningen is a LGBTQ+ interest group and social association. This may sound as two quite different things, but the opposite is true. Both parts support our main goal: creating a safe environment for LGBTQ+ people. Everyone is welcome: young, old, student, non-student, gay, transgender, cisgender or (cis) straight ally. The organisation is built on its volunteers that make all activities possible.

The interest group activities that SHOUT undertakes are:

We help out the LGBTQ+ asylum seekers in Wageningen with a listening ear. Since they are also often very isolated in the asylum centre, we invited them to our parties and pub night so they can enjoy the company of like-minded people.

We organise a support/discussion group called Out Now multiple times a year for people that struggle with their sexuality and/or gender identity. They can join this group and talk about several topics around being LGBTQ+, supported by two volunteers of SHOUT as mentors.

We create a safe meeting place for likeminded queer people. This is also the point our social association part comes in. We organise a weekly association night for our members in our Rainbow Room, where people come together and chat, play games and just have a good time with other LGBTQ+ people.

We also organise parties and pub nights that are open for everyone, including (cis) straight allies. Because of the parties and pub nights we are not only an association that organises activities for our own members, but also in a way the local gay pub. Many of the people that visit our parties are not members of SHOUT, but come by to enjoy a party with relaxed atmosphere where they can be themselves. It is always nice to see same sex couples enjoying the party, feeling free to flirt, dance and kiss especially since this would not be without risk in a ‘straight’ club. 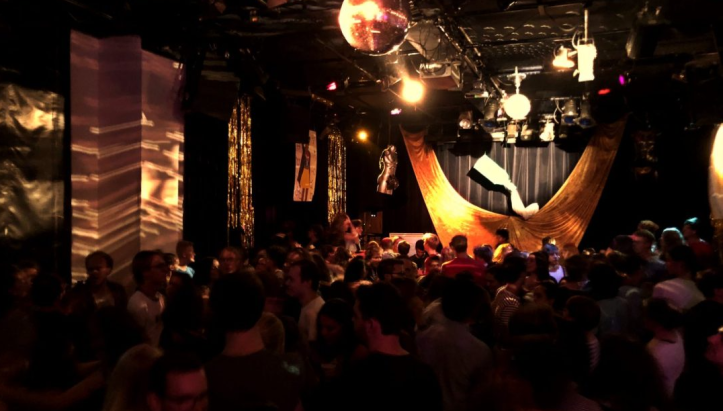 SHOUT has been around since 1968, when it started as a student workgroup homosexuality. The focus started with homosexuality, then bisexuality and transsexuals were added. Nowadays we try to represent the whole queer community and try to be visible in many events in Wageningen like ‘The Park of Freedom’ during the 5th of May liberation day celebration. In 2018 we also joined the Kingsday celebration with a coloring competition for children and collected money for LGBTQ+ activists with Amnesty during the Christmas market.

In 2018 we celebrated our 50 years of existence the whole year long, starting with an exhibition on the Wageningen University. It was the exhibition Gender Free Zone of Petra van Velzen. Her beautiful pictures of people with various gender expressions were put on in the campus café a whole week long. In June SHOUT joined the Utrecht Canal Parade with a Wageningen boat. Since SHOUT is an organisation for the whole of Wageningen it wasn’t only SHOUT members that joined our boot, but also students for the GSA (Gender and Sexuality Alliance) from Pantarijn high school in Wageningen, LGBTQ+ asylum seekers and some other people from Wageningen. In October we organized a reunion where many (former) members got together again. Many good stories from the old days were told that day.

After a year of celebrating 50 years of existence it is time to look to the future. The acceptance of LGBTQ+ people is still increasing, but it doesn’t make it easier to come out. We will continue our activities to provide a safe place for the LGBTQ+ community to meet up and educate people on sexual and gender diversity. We also start with a new series of activities focusing on LGBTQ+ people above the age of 40 since they are less active in our association at the moment, but make up half of the amount of members that we have. We are also working with the city council to make Wageningen a Rainbow City and make the whole city a better and more open place for LGBTQ+ people.

Rinske de Vries joined SHOUT in 2011 when they participated in the Out Now support group. Joining the group helped them a lot in the acceptance of their sexuality. In 2012 they became active as a volunteer in multiple committees and their goal has always been to let SHOUT be the safe place to others as it also is for themselves. In 2018 they joined the board as treasure and now they are the volunteer’s coordinator.

The editors of Raffia are always looking for interesting articles and columns about gender, diversity, and feminism. Would you like to write an article, perhaps following a research project, thesis, art project, or event? Or would you like to share your experiences or opinions in a column? Please contact us at raffia.magazine.ru@gmail.com!