Western societies aspire to ideals of equality but it’s in moments of crisis that the reality of where we still are comes to the fore. When it comes to war, gender norms are almost as rooted as they’ve always been. Even with catchy stories of female soldiers in the early days of the Russian invasion of Ukraine flooding our timelines, traditional gender roles still take hold.

When Nataliya was younger, her brother was sent to Siberia to die. “She just got a note [saying] that he’s dead and now the Russian soldiers are back. It’s history repeating itself”. Three weeks into the Russian invasion of Ukraine, Nataliya’s granddaughter, Liliya, who’s been living in Nijmegen for two years and is telling her story to Raffia, finally convinced her mother and grandmother to escape the war. “I managed to convince them to come here because for three weeks they were under sirens in the basement waiting for the sirens to stop. I couldn’t just be checking on them every hour so I just wanted them here”, says Liliya. It took some convincing, “because they kept saying it’s their home”. From their hometown of Ivano-Frankivsk, a taxi had to be arranged to the border which both women had to cross on their own. Across the border, they were taken to Budapest, where they stayed overnight with relatives who then put them on a train through Austria and Germany until a volunteer finally brought them by car to Nijmegen. The family is now reunited and safe in Nijmegen, whilst war keeps ravaging their country every day.

Liliya still remembers “very clearly” the first day of the occupation. “I got up and received a lot of messages from my foreign friends and I was completely shocked. I realized that the war had started. I went to read the news and I saw my city listed as being attacked”, she recalls. For two months before the war actually started, Liliya had been trying to bring her mother, who is 63 years old, and her grandmother, who is almost 90 years old, to Nijmegen, in anticipation of what seemed all too inevitable. “It was extremely stressful for my grandmother. She’s never been outside of Ukraine in her life and she wants to go home”. The beginning of the war was just one of those moments when she wished she had been so utterly wrong. In the end, it wasn’t a matter of if, but when.

“In the beginning it was the worst because I was crying all day long”, Liliya recalls. During the first week of the occupation, she would go to bed and couldn’t go to sleep until five in the morning, when the bombs would finally stop raining down in Kiev. But then she found a purpose far away from her home country, in the Dutch city of Nijmegen. “Because we got organized to help, I received a lot of tasks and then I had some purpose so I wasn’t focused on the news so much. During the day I could function and only this helped to have some clear perspective on what to do. If you don’t help, if you don’t do anything, then you’re just immersed in this constant stream of dead people, dead children, babies in bunkers and I don’t know how to process this”. 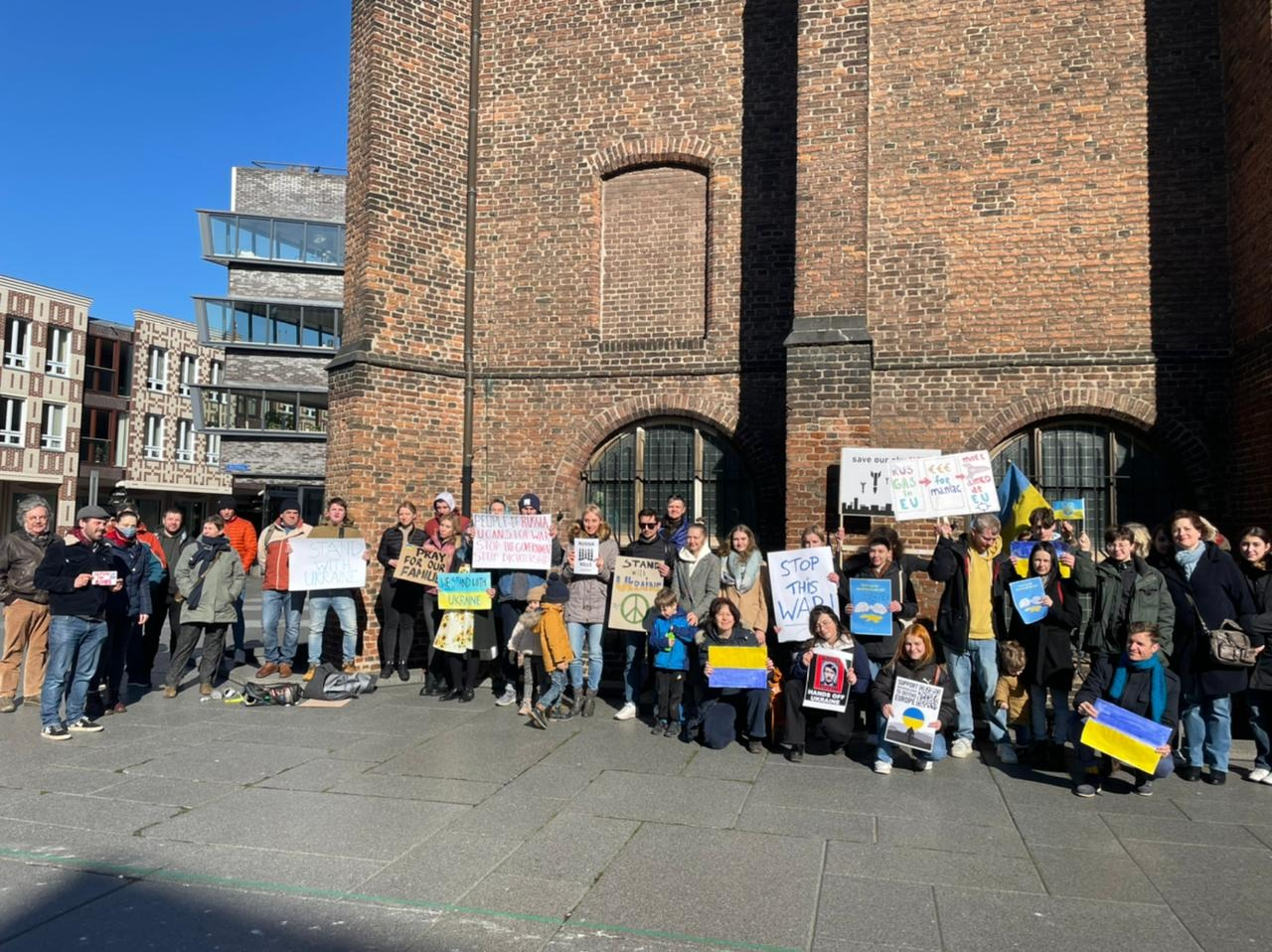 It all started with just Liliya and Anna, another Ukrainian living in Nijmegen, protesting alone against the war. The movement has escalated since, first to daily protests, which turned into weekly protests every Saturday at 11 at Mariënburgplein. The group called themselves “Nijmegen4Ukraine” and is active on Facebook, Instagram, Twitter, with more than a thousand followers, and WhatsApp, where they have 100 active volunteers doing practical work such as helping with collection points, which resulted in almost 20 vans filled with supplies being sent to Ukraine from Nijmegen. “We’re collecting every week and sending medical supplies and other urgently needed items to Ukraine. This is done through the official foundation of Ukrainians in the Netherlands”, she explains.

Back in Ukraine, Liliya’s aunt decided to stay behind. “She doesn’t want to leave because she says that if everybody leaves [then] who’s going to cook for the soldiers so that’s what she’s doing”. Even though in the beginning of the war stories of women taking up arms came flooding to the surprise of most of us, traditional gender roles have come to the fore: the fighting is still mostly left to the men – the ones forbidden to leave the country in order to defend it – while the women who choose to stay are keeping occupied with jobs such as cooking, cleaning, and sewing military uniforms.

Liliya herself encapsulated this idea when she shared the story of a woman she knows who joined the Ukrainian armed forces to defend her country. Did this surprise her? “Yes, because it’s really brave. For male colleagues to join the armed forces it’s an obligation right now but women who joined the armed forces, they do it voluntarily now”. However, she clarifies: “Men and women also join the territorial defense – which is not the official army – voluntarily”. “Women don’t only cook and clean. They also volunteer [by making] nets, look for and make bulletproof vests”, she explains. As for the men, Liliya points out that “there are thousands of volunteers who joined the army willingly and many more are eager to join”. “Ukrainians are fighting because they feel it’s right rather than because it’s mandatory”. 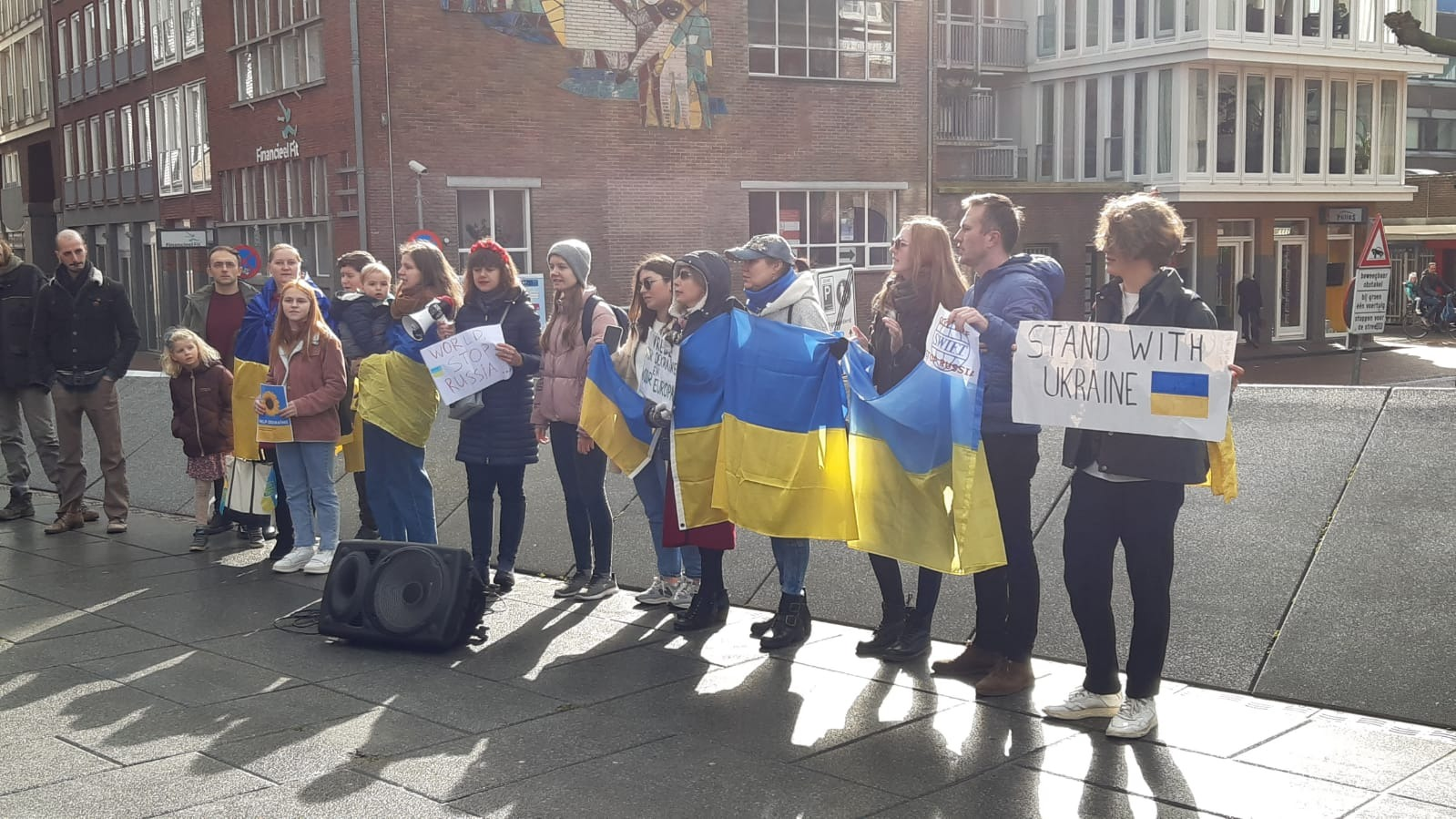 “WHEN IT COMES TO FIGHTING THEN A DISTINCTION IS BEING MADE”

“When we think of heroes, when we hear the word soldier, we probably think of a man and this is still quite the norm in Western militaries”, explains Jutta Joachim, professor of International Relations at Radboud University. “If you look at the percentages of women in militaries the numbers are still rather small, rarely going beyond – if at all – 15%. Therefore, this is still surprising to us, when we see women taking up arms, women using violence. It’s standing out, it’s the unexpected”, she contextualizes.

In Ukraine, women make up around 15% of the army, which amounts to around 30,000 women currently fighting the Russian invasion. In the early days of the war, news items of female soldiers surprised everyone, a surprise understood by Jutta Joachim as rooted in “traditional conceptions and imagination that a soldier is still a male”.

While there is no enforced military conscription in Ukraine, under martial law, Ukrainian men aged between 18 and 60 have been barred from leaving the country and are widely expected to take up arms, while women are under no such mandate. Even though Jutta Joachim recognizes that the military is changing, it is “not yet to a degree where we would see [women fighting] as being a normal occurrence”. “Women are still seen in somewhat traditional roles and not associated with violence, let alone using arms and violence”, she explains. Moreover, “when societies are in crisis, under pressure, then these norms that are deeply rooted come again to the surface”.

As Jutta Joachim explains, even though women are allowed – and, to a certain extent, encouraged – to join the armed forces, “when it comes to fighting then a distinction is being made: who is able and capable of fighting and who is not and this protector and victim norm is starting to take hold – who is conceived as being the vulnerable and who is conceived of being the one providing protection to protect the nation and the family”. Ultimately, it’s the man who does the fighting, and it’s the woman who takes care of the children.

“EVERYTHING IS USED TO BRING THIS NATION DOWN TO ITS KNEES”

As the war ravages on, brutal accounts of atrocities of murder and rape are coming to light. “Rape becomes a weapon of war and it’s been for many centuries. This is how you destabilize your enemy the most when you strike them with their sexual identity”, explains Jutta Joachim, adding that “often times this is happening in front of your family, your children”. “It’s a very powerful weapon that you can use to break the backbone of your enemy”.

Also here rape plays a gendered role. Not only on the victims – who are mostly women, but not only – but also on those who were expected to protect them. “It’s also signaling to the husbands, to the men of society that they are weak, that they didn’t manage to protect their women, their children, from that onslaught. It’s also in an indirect way breaking their backbone because then they feel guilty of having been unable to protect and provide help to their women and children”, explains Jutta Joachim.

“The magnitude of what happens there is sometimes underestimated and how debilitating it can be. We don’t grasp the full dimension of it. In the media and in popular discussion, what’s undermined is really what it does to a nation, to the victims of the rape.”

Moreover, assumptions take hold as women are taken to be the sole victims of a crime mostly perpetrated by men. This leaves behind a vacuum of male victims of rape and assault whose stories are never heard. “The way we talk about it, the way it’s reported – it’s gendered because we only look at the women and we don’t look at the full magnitude”, says Jutta Joachim.

Ferris-Rotman. Ukrainian Women Are Mobilizing Beyond the Battlefield to Defend Their Country. TIME, Lviv, March 22, 2022. https://time.com/6159261/women-ukraine-war-russia/

View all posts by Raffia

Would you like to be a part of a renowned magazine on gender, diversity & feminism? Radboud Gender & Diversity Studies’ Raffia magazine is looking for new members! See how you can apply.